Sales Problems: When Should I Stop Calling A Sales Prospect? 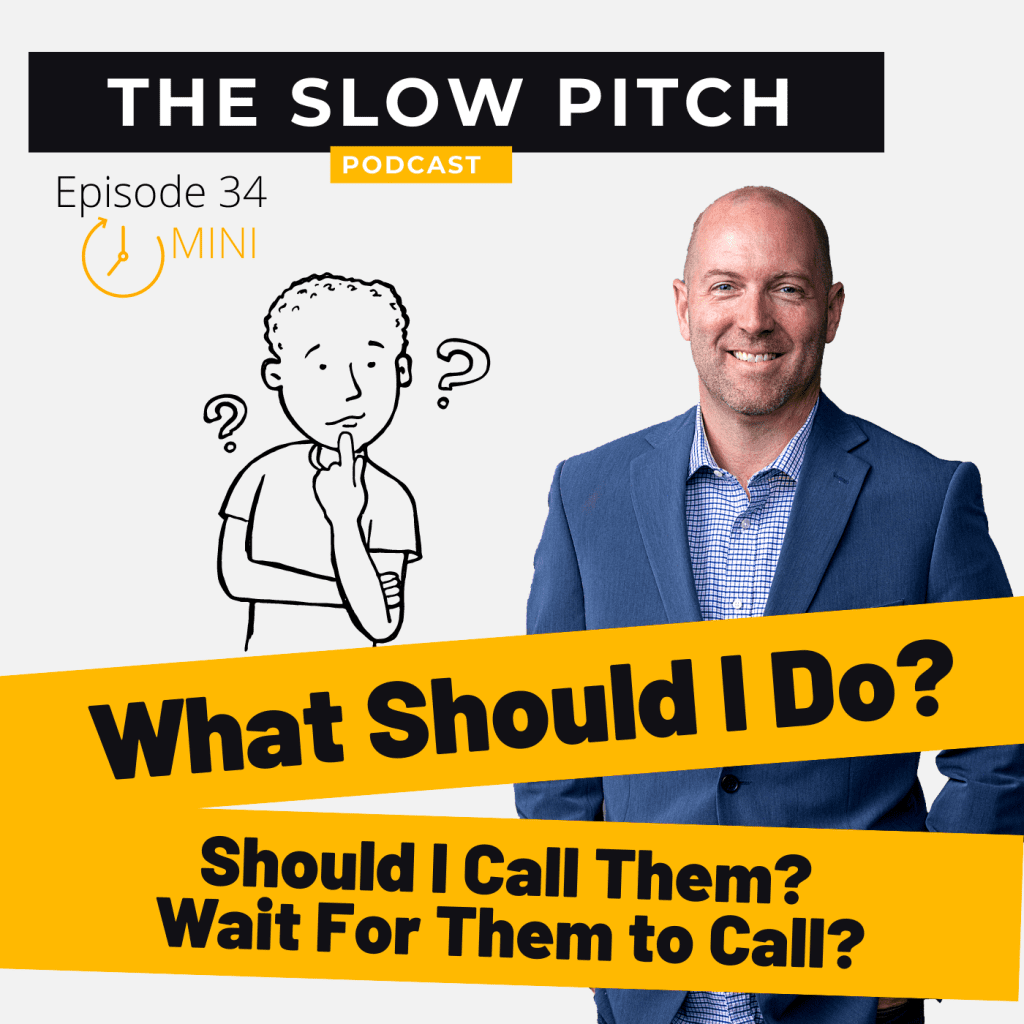 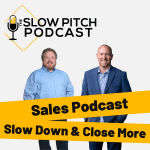 The Slow Pitch Sales Podcast
Sales Problems: When Should I Stop Calling A Sales Prospect?

Do You Have These Sales Problems?

If you’re wondering, “When should I stop calling a sales prospect?” Or worse, should I even be calling them? Or should I wait for them to call? What should I do? If you’re confused, you’re doing it wrong. We talk about these problems. Calling a sales prospect should only be on purpose and not cause you problems. You should only call when you know you should, anything less is degrading to you. This is one of many sales problems but also one of the most common.

That sounds harsh, but think about it: If they have you off kilter or wondering if you should starting calling them, that prospect is playing a game with you…and you’re going to lose. That is a problem you should not have to deal with…You need to put yourself at their level, not beneath them. One of the sales problems that most salespeople don’t know how to fight is how to level the playing field. You need to think, “They really should be so luck to be a client of yours.” Right?

You didn’t get here by accident. You got here because of the questions you asked or didn’t ask. You more than likely didn’t ask enough about their pains, how they affected the business and how they are impacted directly. By getting to the bottom of their pains you prevent the sales problems you’re having…Not knowing whether you should call.

That said, this episode is a mini episode. Listen in as Rob shares his thoughts on what you should do if you’re not sure where you are at in the sale process. If you’re asking, “should i call the prospect because I don’t know where they are at in their decision,” this episode is for you.

Know When They’re Not Buying What You’re Selling

Welcome back, everybody to The Slow Pitch. Hey, today, I want to just kind of address a question that came up a while back. Somebody asked the question, when do I stop calling them? When should I just like, I feel like I’m bothering them. So today, I thought that might be a good question to answer. Because I’ve been there and I’ve been stuck thinking, Should I call? Should I know? Cool? I don’t know. So this might be a good time to talk about it.

You’re listening to The Slow Pitch Podcast, a podcast about selling less and closing more?

So the first question that I would ask back, when somebody asked me that question, is, how did you leave it last? Because the number one reason that you’re probably wondering whether or not you should call him or not, is because you didn’t end your last call with some form of a question that says, hey, if I don’t hear from you, on our next step here, what, what we should be doing? What should I do? Or you didn’t even ask the question? What’s our next steps? That is the number one simplest question to ask, what’s our next step? What do we do? Because it puts them in a position of control. It makes them feel important.
But more importantly for you, it tells you here’s what to expect. And once they do, you can confirm with them and say, Okay, I heard you say, you’re going to double check on this, you’re going to get back with me about budget. And you’re going to ask a couple of other people some internal questions. Now, you know, that there’s possibly a reason that your sale may stop.
So when they say something like, Hey, we’re going to ask some more questions. There’s more people internally. Now you have to dig into that. Because if you say, Well, what exactly do you mean by that?

What are some of the questions that you’re going to need to ask or just help me understand what’s what are you asking about, so that you get a better understanding of what that means? And the reason you want to do that is because those questions tell you something, they’re an indicator that they can’t make the decision by themselves. And so you’re gonna have to vet that out. And you have to pull from them. So that they get to the point of saying, yeah, why don’t you just come to another meeting before we go on to the next step?

Alright, the next thing that could happen is that they could say, alright, we’re going to start the process internally, so that we can start to get payment for your deposit, right. So when that happens, you’re going to want to make sure you kind of dig into a little bit more of that to make sure you understand it, you’re comfortable with it. But once you have all that information, once they kind of describe that next step, then you need to kind of circle back to saying, Hey, I know you said that you’re going to go through all these different steps internally, so you can get the payment process and really get that stuff started. If I don’t hear from you with within like a day or two, or by the deadline that they give you.

So if they say I’m going to do all this stuff, and by Tuesday of next week, you will be able to tell you when you’re going to get your payment deposit, all that good stuff. When you get to Tuesday, what’s going to happen, what if you don’t hear from them? That’s usually the situation that you’re in. When you say, what do I do? Do I call them or do I not? If you’re in that position, that means you haven’t gone through those extra steps and asking those questions. And that’s when you’re kind of wondering, okay, I haven’t heard back from them.

They said they were going to get the check that little simple question of, hey, when when I get to Tuesday, and it’s kind of approaching the end of the day, I haven’t heard back from you. Well, what do you want me to do? And by asking that, you’re putting it back into their, into their court, because then what you’re going to hear back from them usually is, wow, if you don’t hear from me by Tuesday, you should just give me a call. Just…call me call me directly. That’s the kind of stuff you’ll get.

Maybe you’re thinking or maybe you’re second guessing, like you need to really pull back and make them feel like they’re they’re telling you you’re not getting the sale. And by doing that, they’re going to either come back and say no, no, listen, if you don’t hear back from me, you call me. Or they’re going to come back and say, Well, I just got two other things I got to take care of, I gotta talk to other people, I got all these other things that are going to give. So by not asking certain questions at the end of your previous meeting, you’re going to miss out on the opportunity to find out what’s happening, these little details that sometimes you can ask all the questions you want, but they just don’t share it with you. And this is another way to find out whether or not they’re really serious and they’re moving forward or not.

All that said already. If you’re getting to any point in your process of sales, and you had a conversation, you haven’t talked about budget, but you’re getting to the next step. You’re really starting to work around all the different elements that go into their sale, and you end up feeling like I don’t know what I should do, should I call him? Or should I not?

You need to stop and ask yourself the question, did I really get a good sense of pain? Are they really, really going to be able to buy this? Do they really want this? Or are they just being nice to me? And and they’re just trying to ghost me? Because they don’t they feel bad for spending so much time with me. Ask yourself that question very seriously. Because I feel like at that point, they are putting you off just a little bit because they feel bad for how much time they spent with you. I hate to tell you that.
So at any point in time, if you start feeling that way, you need to back up to the previous meeting and figure out, did I dig in to their pain? Did I get a good feel for whether or not this is something they really need? Is it worth their time worth their energy? Those are the questions you need to figure out. Is that true or is that not. So I hope that helps you out there.
I hope that helps you bring a little more clarity as to how you should end, any meeting. Every meeting should end that way with a clear understanding of what’s happening next. So until next time, have a good week.

Thanks as always, for listening today. If you like this podcast, please subscribe and leave us a review. We really appreciate it. Follow us on Twitter, Instagram and Facebook at The Slow Pitch. We were mixed today as always by Johnny Polakis. And we were produced by high gravity studios, music credits and other notes are in the show notes section on TheSlowPitch.com And we’ll be back with another episode soon.